Home Who's Who Documents Media & Events Testimonials Issues & Concerns FAQ's Search Donate Contact Us Menu
Save-Open-Space Hui Media & Events
This page contains Media and Event information concerning the proposed resort expansion/“glamping” development on the Makai Woods Golf Course in Princeville, Kauai.
Meetings & Events
9/25/21 - Summary notes from the 9/16/21 PHCA Board Meeting.
This was a rather contentious meeting run by PHCA's hired parliamentarian where the Board's update on Starwood Capital and glamping was read by GM Maylette Garcess with little opportunity for the community to ask questions. There were statements by the Board noting the ongoing legal petition by individual residents to the Hawaii Court asking for declarative judgment on the sole issue of whether glamping is ancillary to golf.
Summary of September 16, 2021 PHCA Board Meeting
Re: Starwood Capital’s Glamping/Resort Expansion Project

Our apologies for the delay in getting this summary out. First, we were rather taken aback by the contentiousness in general and lack of discussion regarding the Starwood Capital Group’s resort expansion efforts in the meeting. To say the least, it was a long and vexing meeting chaired by the Board’s hired parliamentarian, Steve Glanstein.

This summary addresses the key points of the meeting.

In addition to Starwood Capital Group’s Glamping Project, the September PHCA meeting included a proposal from another mainland developer who seeks to get a Special Use Permit for the development of another Open Space “green belt” property, Parcel ID 540050370000 on the County tax rolls. We are aware of the problems presently existing in the neighborhood near Queen’s Bath and it is clear from the discussions at the meeting that Queen’s Bath is another hot button issue that deserves careful consideration by the Board, the membership (particularly all the adjoining neighboring property owners), and all other stakeholders affected by the proposal.

We understand that a committee may be formed to study the situation and make recommendations regarding the project. Stay tuned.

Now on to Glamping/Resort Expansion:

The best news first – Bill 2822, with Council-approved Planning Department changes, was passed unanimously by the Planning Commission so it now goes back to the County Council for a 2nd reading. We anticipate it will be on the next Council meeting agenda. As a Council-sponsored bill we expect it to pass and then move on for signature by the Mayor. This should happen sooner rather than later.

Why wouldn’t the PHCA Board WANT a judicial determination of whether glamping is illegal under the Dedication?

A Petition for Declaratory Relief has been filed in court seeking judicial determination of the single issue of whether glamping is ancillary to golf. The only party named as a defendant in the suit was Starwood Capital Group/SOF-XI. THE PETITION DOES NOT SEEK ANY MONETARY DAMAGES nor are money damages available in this type of lawsuit.

A Princeville resident attending the meeting implied that PHCA candidate Tom Mull might benefit financially from a judicial ruling in favor of the plaintiffs. That is clearly not the case as there are no money damages sought in the lawsuit. However, since the issue of conflicts of interest has been raised, we wonder about the appearance of impropriety resulting from the fact that Mr. George has officially sided with Starwood in its Motion to Dismiss the case.

The real beneficiaries of a judicial ruling that glamping is not “ancillary to golf” will be the Owners of Land in Princeville who are protected by the Dedication.

For those of you in PV1 – PLEASE VOTE in the upcoming election for the 2 open board member seats. BALLOTS ARE VERY CONFUSING, AND WE ARE ALL WAITING FOR CLARIFICATION ON HOW TO VOTE for selected candidates; the email that was intended to help only muddied the waters further. Please keep an eye out for the ballot – they are in the mail. We would like to see Tom Mull elected because of his clearly stated position to defend the Dedication and preserve our Open Space; we believe the Board needs a strong counterpoint to the present president’s “let’s make a deal” approach. All the candidates are qualified, committed members of this community so we encourage you to read their bios that accompany your ballot. Cumulative voting is allowed under the PHCA rules; this means two votes can be cast for one candidate.

Thank you for reading to this point – for a more detailed report on this portion of the meeting, including our point-by-point response to PHCA’s posted statement regarding glamping, please visit SOSHui.org, to read the rest of the story.

As always, Mahalo Nui Loa for your ongoing support!
SOSHui.org

10/7/21 - Summary of 10/6/21 County Council Mtg – Bills 2822 & new Bill 2838
Here's our summary of the 10/6/21 County Council meeting at which they dropped the original Bill 2822 in favor of a more pointed, and very supportive, Bill 2838. We are on the threshold of truly being able to save Open Space from "developed camping" on all of Kaua‘i.
9/25/21 - Summary notes from the 9/16/21 PHCA Board Meeting.
This was a rather contentious meeting run by PHCA's hired parliamentarian where the Board's update on Starwood Capital and glamping was read by GM Maylette Garcess with little opportunity for the community to ask questions. There were statements by the Board noting the ongoing legal petition by individual residents to the Hawaii Court asking for declarative judgment on the sole issue of whether glamping is ancillary to golf.
9/25/21 - Extended Notes of the 9/16/21 PHCA Board Meeting - THE REST OF THE STORY
This is the Board’s statement read by the GM Maylette Garces with SOS Hui editorial notes notes where we believe clarification is necessary. Note the reference to the ongoing legal petition by individual residents to the Hawaii Court asking for declarative judgment on the sole issue of whether glamping is ancillary to golf.
9/14/21 - Bill 2822 was by the Planning Commission.
This was a GOOD DAY TODAY! The Kauaʻi County Planning Commission unanimously passed Bill 2822 which when signed into law by Mayor Derek Kawakami will no longer allow "developed campgrounds" on Open-zoned space. In addition, it also would only allow "developed camping" in resort zoned land and not in commercial space. This was a big step in helping save Kauaʻi's open space.
9/10/21 - 9/14/21 Planning Commission hearing on Bill 2822 (no developed camping / "glamping" on zoned Open Space)
This will be one of the most important Planning Commission meetings you can watch and to which you can submit testimony. Bill 2822 has been making its way through the Planning Department and if passed, would stop Commercial Developed Campgrounds from being constructed on zoned Open land. This could stop Starwood Capital's efforts to develop "glamping" in Princeville.
8/22/21 - Summary notes from the 8/19/21 PHCA Board Meeting
General Manager Maylette Garces read a statement (read the full text by clicking on above title) from the BoD. Mr. Glanstein, the hired parliamentarian, announced that no answers would be given (on this or other topics). We have several questions that need answering and comments on the legal proceedings mentioned in the BoD's statement.
7/18/21 - Summary Notes from the 7/15/21 PHCA Board Meeting
PHCA President Sam George reported the Board and its attorneys continue to meet and discuss a community benefits package with Starwood Captial Group (SCG). A number of community members asked questions of the board which are noted here. SCG VP. Jason Cruce reiterated that profit motive was the primary reason for SCG's desire to develop glamping on the Makai Woods golf course, currently zoned Open Land and which the SOSHui is fighting so hard to keep Open.
7/14/21 - Summary of the 7/13/21 Planning Commission public hearing on Bill 2822
The outcome of the Tues. July 13th public hearing at the Planning Commission did not go as well as we had hoped. Despite numerous people speaking in favor of Bill 2822, AND 141 emails submitted to the Planning Commission in support of the bill, the result of the meeting was a deferral to the Commission’s September 14, 2021 meeting. Click on the title to read more about the meeting and view a shortened video of it and the testimonials.
6/19/21 - Summary Notes from the 6/17/21 PHCA Board Meeting
Maylette Garces gave the update to as many as 108 Zoomed in community members on the situation with Starwood Capital Group’s efforts to develop 3 projects – 2 parking lots, 6 private homes and, of course, the commercial Developed Campground/resort expansion on the Woods 1-3. The Board voted to REJECT the May 1st proposal from Starwood Capital. Daniel Ersoy made an impassioned testimonial to the Board supporting Open Space.
6/16/21 - Summary notes from Starwood Capital Group's VP Jason Cruce's presentation at the Makai Golf Club
This is a summary of the highlights from the presentation given by Jason Cruce outlining the latest proposed expanded development plans which now include building houses on the bluff beside the 1 Hotel complex. This is in addition to the proposed "glamping" development on Princeville's dedicated Open Spaces. Open the details to find a link to the full 2hr meeting video made available by SCG.

More...
Surveys
1/1/21 - Results from the Dec 2020 PHCA Homeowners' Survey.
View the responses to each of the survey's questions. It appears to this writer that those willing to take the time to fill out the survey (782) are very much opposed to losing existing open space in Princeville. The final tally of (782) respondents exceeded by almost double what PHCA President Sam George noted at the prior meeting as being statistically significant to be a valid response. Take a moment and review the details.
Glamping images 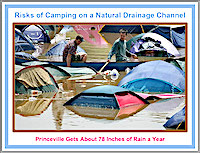 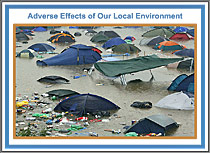 This is what happens to "campers" on Kauai's north shore. Imagine "glampers" in the middle of the Makai Woods golf course waking up to one of our downpours. 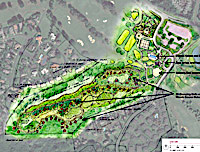 This version of Starwood Capital's proposed glamping development on the Makai Woods holes 1-3 is virtually the same as that proposed in December, 2020. It was made public at the 5/20/21 PHCA BOD meeting attended by Jason Cruce, VP Starwood Capital Group. Cruce noted the only design changes were the removal of their originally proposed "gathering spaces". The placement of the 50 tent sites was unchanged. 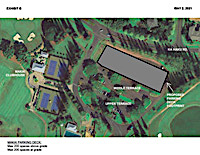 Starwood Capital, at the 5/20/21 PHCA BOD meeting, made public their proposal to build a new (2) story parking structure on the lower level of the existing Makai Golf Club parking lot allowing for a total of 400 vehicle stalls. 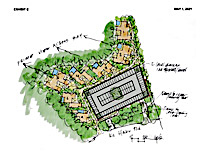 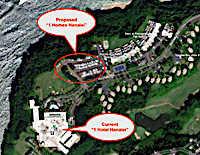 Starwood Capital made public at the 5/20/21 PHCA BOD meeting, their proposed development of up to (24) new hotel units or (6) single-family new homes surrounding the current parking facility for the 1Hotel guests. This was in addition to the 50 glamping sites they proposed for the Makai Wood holes 1-3.

This image came from the sales/FAQ materials presented by Starwood Capital at the 5/20/21 PHCA BOD meeting. It represents their latest tent rendition of what they anticipate building for glaming houseing. 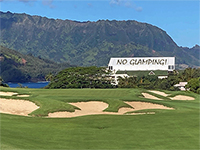 This picture was taken by an unknown member of the community while they were playing golf on the Ocean course. It appears someone has definite thoughts about "glamping" in Princeville. 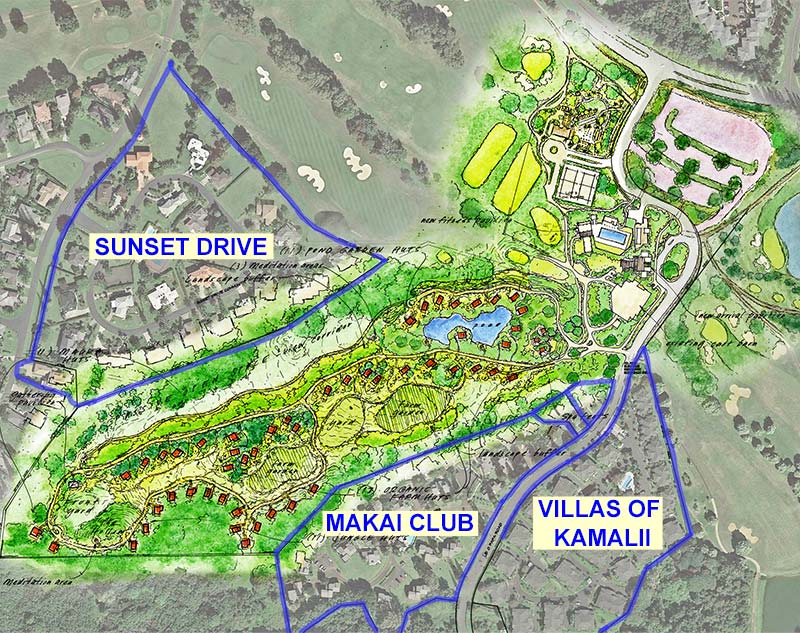 This second version of the design was distributed to some homeowners as part of the East West Partner's Christmas letter. Click the image to view a more detailed version. In this version they have completely scrapped their building of a restaurant on top of the golf cart barn apparently due to its expense. This rendition is the result of someone from their contracted design company, Hart Howerton (planners, architects, landscape architects and interior designers) actually visiting the site for the first time in Nov. 2020. View original document. 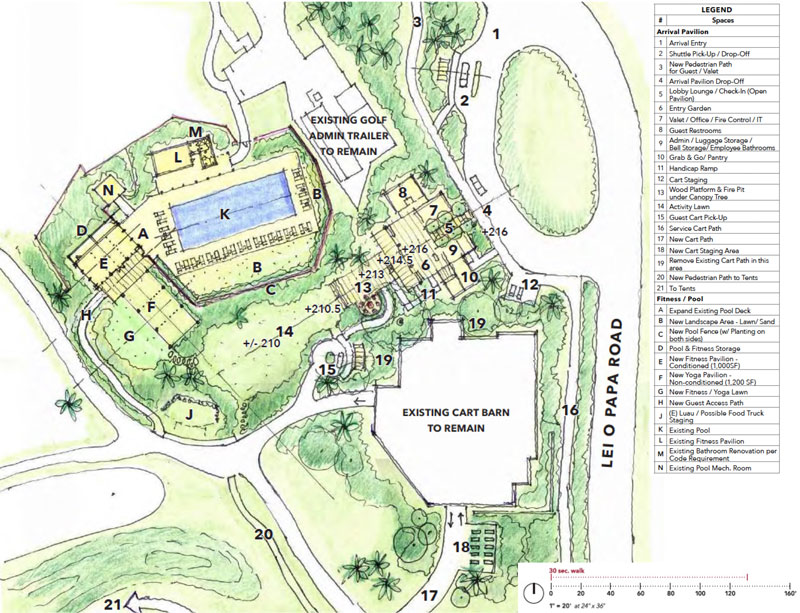 This is where the Makai Golf Course's current pool, workout area and golf cart barn are located off Lei O Papa Rd. Click the image to view a detail version and see if you can find where a "food truck" parking area is located. One can only presume it will be for feeding their "glamping" guests. This will undoubtedly significantly increase the traffic on Lei O Papa Rd and out to Kuhio Hwy via Hanalei Plantation Rd. 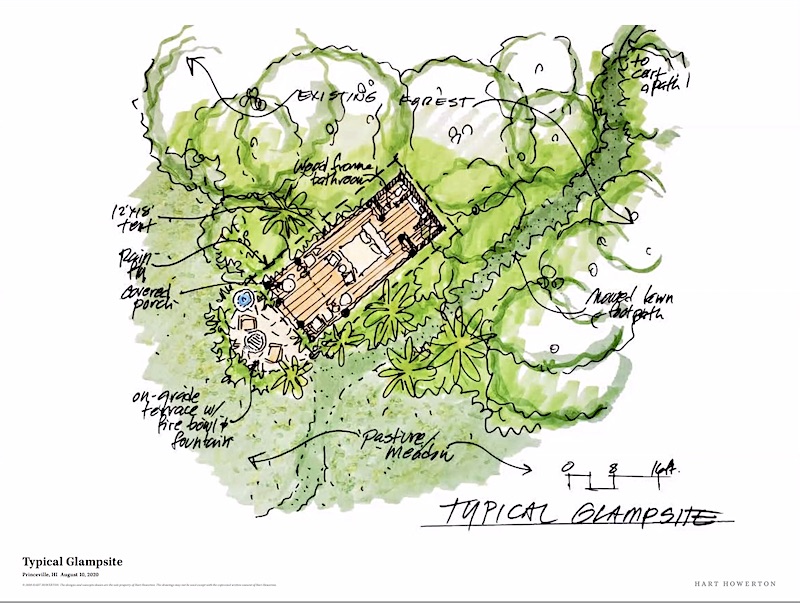 This first proposed design of what a "glamping" tent layout might be was made available by East West Partners in Aug. 2020. We've not seen any updates since then.

Princeville to the Lighthouse ~ © Bob Wright