Re: Makai Princeville Glamping and 1 Homes Hanalei Land Use Support

Mr. George and Members of the Executive Board:

This letter is in response to your December 17, 2020 letter and the continued discussions with our partners regarding community outreach for our proposed projects. We appreciate the Princeville at Hanalei Community Association’s ("PHCA") willingness to work through our mitigation commitments to achieve a reasonable and mutually beneficial approach to our land use proposals.

In response to your proposed offer of support for our projects, we request that the PHCA agree to a development agreement document providing support of SOF-XI KAUAI PV HOLDINGS, LP and its affiliate entities ("Owner") in their pursuits of the following projects:

2. A parking structure of up to four hundred (400) parking stalls with structured parking decks of two hundred (200) stalls at grade and two hundred (200) stalls above grade, which will be on a portion of Lot 6 (File Plan 1179), further described as Kauai Tax Map Key No. (4) 5-4-006:006. The proposed parking structure is proposed to be located on the existing Makai Princeville Resort Golf Course ("Makai Course") parking area along Ka Haku Road. A conceptual plan is attached as Exhibit "B".

3. Either the development of up to twenty-four (24) apartment-hotel units project or up to six (6) single-family dwelling units and associated required parking and amenities on Lot 4-A, further described as Kauai Tax Map Key No. (4) 5-4-011:004. The proposed apartment-hotel unit project or single-family dwelling unit project is to be located on the existing parking lot for the 1 Hotel Hanalei Bay. A conceptual plan is attached as Exhibit "C".

In exchange for PHCA's written and verbal support of the three (3) projects ("Projects") described above and conceptually shown in Exhibits "A", "B" and "C" and the Owner's ability to obtain all final land use permits for the Projects, the Owner shall commit to the following community benefits package:

7/5/21 - PHCA Board rejects Starwood Capital's May 1st, 2021 proposal in 6/28/21 letter to SCG but would begin further discussions.
The PHCA Board voted unanimously at the 6/17/21 monthly board meeting to reject the May 1st, 2021 proposal from Starwood Capital Group. In the follow-up letter to SCG they also stated PHCA would begin further discussions. View the rejection letter date 6/28/21.
6/29/21 - PHCA submits comments regarding Bill 2822 to the Planning Commission before the July 13, 2021 hearing.
This letter was was sent by PHCA President Sam George to the Kaua‘i Planning Commission in which he points out that that "PHCA's members hold different opinions regarding Starwood's proposed glamping project. In addition, he noted that "PHCA would like to emphasize to the Commission, however, that all of PHCA's members share a common goal of preserving open spaces in Princeville, both in the immediate future and in the long term. PHCA appreciates the opportunity to participate in the legislative process in furtherance of that goal.". It should be noted that Sam George did not specifically say that the PHCA BoD was in support of Bill 2822.
6/18/21 - SCG's DRAFT Project Development Use Permit Application dated May 17, 2021
This the full pre-filing 195 page DRAFT document submitted to the County Planning Department. It was submitted by Starwood Capital's local attorney's, Belles Graham LLP, located in Lihue.
5/18/21 - Letter from Starwood Capital Group to PHCA Board (updated Glamping proposal)
This letter dated May 1, 2021, was sent to the PHCA Board requesting PHCA's support for Starwood's developing 50 glamping sites on the Makai Wood Golf Course, holes 1-3, building a parking structure where the current Makai Golf Course parking area is located, and the building of an additional 24 apartment-hotel units on the land adjoining the current 1Hotel (ex St. Regis) parking area. In return, Starwood proposes to not build on the remaining Makai Golf Course land and presents other miscellaneous "benefits" to Princeville.
5/18/21 - Glamping in Princeville: Introduction, Plans and Frequently Asked Questions (by Starwood Capital Group)
This is Starwood Capital's May 2021 sales document outlining their proposed glamping design for the Makai Woods Golf Course, holes 1-3. They have made virtually no changes from the glamping design they presented in December 2020.
12/17/20 - Proposal letter dated 12/17/20 from Sam George, PHCA President, to Will Little & Mark Hall, of East West Partners, who at the time represented Starwood Capital Group on the issue of glamping.
This letter was finally made public in June 2021 after repeated requests from Princeville community members. As Sam George stated upon making it public, "it is no longer relevant". However, it is very insightful into the mindset of the PHCA Board in Dec. 2020 before the board's composition changed in May, 2021.
Kauai Planning & Zoning Documents
Proposed Bill 2822 - Amends the Comprehensive Zoning Ordinance (CZO) to limit "Developed Campgrounds"
This recent (Apr 7, 2021) proposed Bill seeks to amend the Comprehensive Zoning Ordinance (CZO) to prohibit commercial “Developed Campgrounds” on land zoned Open, Agricultural and in residential neighborhoods.
At the County Council video meeting held on Wednesday, April 7th, 2021 Councilmembers Luke Evslin and Vice Chair Mason Chock introduced .

Bill 2822 unanimously passed first reading at the County Council meeting and has been referred to the Planning Commission. (County Planning Director Ka‘aina Hull was in attendance at the Council meeting and answered specific questions from the council members regarding the bill prior to the vote). It will be reviewed by the Planning Commission and there will be a public hearing. The bill will require a second reading at the County Council and then there will be a final vote. If passed, it will go to the Mayor for his signature. If Bill 2822 becomes law it will prohibit “Glamping” on the Makai Golf Course and all golf courses in Princeville.

Bill 2044 - Ordinance to Amend Open District Designations in Princeville (year 2002)
In the summer of 2020, Bill 2044 was discovered during a Planning Department "clean-up" effort and referred from the Planning Department back to the Council to determine its fate by declaring it dormant.
Had Bill 2044 not laid dormant since 2003 but passed and become law, it would have made the green space in Princeville Phase 1 permanent and unavailable for development, thus not available for Glamping. After a ground swell of testimonial emails sent to the County Council, the Council voted to unanimously on 11/25/20 to defer the Bill rather than dispose of it. Council members Felicia Cowden and Kipukai Kuali‘i will be working together to rewrite the Bill and subsequently resubmit it to the Council at a future date.
Kauai's Comprehensive Zoning Ordinance (CZO) (eff 2012 as amended)
The CZO document contains Kauai's detailed zoning rules which cover such topics as definitions of "camping", proximity limitations to residential housing, detailed requirements for permits for Open districts (ie. Makai Golf Course) vs Residential (Princeville) etc. Check the 1,000 yards limitation.
View the current CZO website or Kauai County's CZO PDF (eff 2012 as amended) document. 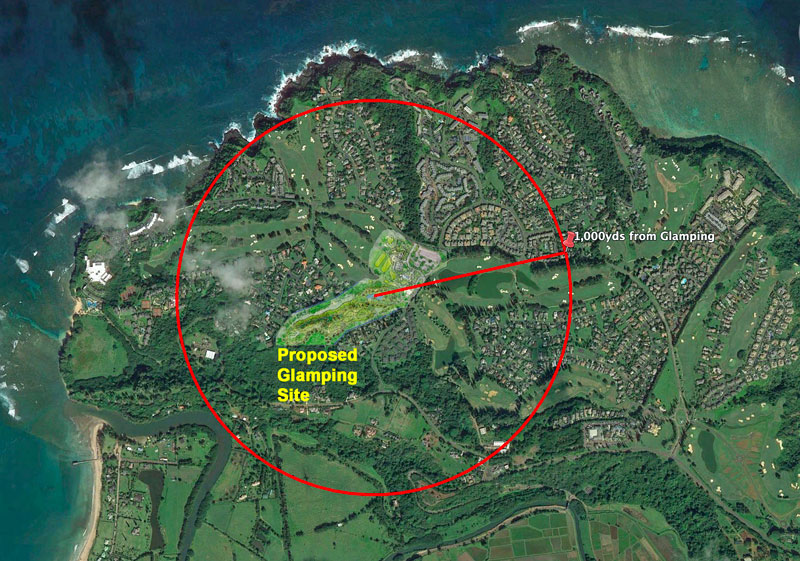 Kauai County Codes
Title-IV: COUNTY PLANNING AND LAND DEVELOPMENT
Chapter-10: SPECIAL DEVELOPMENT PLANS
Article-2: North Shore Development Plan (Archived PDF - 9/22/20)
Article 2. North Shore Development Plan
Sec. 10-2.4 Use Districts.
(e) Special Regulations Applicable to All Districts.
(7) Recreational Uses.
(A) A use permit shall be required for the development of any campsite, ...
(B) No commercial recreational use or facility shall be allowed within a residential district which increases the ambient noise level of the neighboring residential areas.
Kauai Planning Commission & web site
The Planning Commission consists of seven (7) members from the public that are appointed by the Mayor and confirmed by the Council. The Planning Commission meets twice a month (2nd & 4th Tuesdays) to hold public hearings on zoning and land use permits and applications, as well as render decisions on these matters.
Kauai Planning Commission web site.
Members (Jan'21): Glenda Nogami-Streufert, Chair; Donna Apisa, Vice Chair; Roy Ho, Subdivision Committee Chair; Melvin Chiba; Helen Cox; Francis DeGracia; Lori Otsuka. Planning Commission Agenda & Public Hearing Notices
Planning Commission Agendas & Minutes
Kaua‘i Kākou: Kaua‘i County General Plan (Finalized March 15, 2018)
The Kaua‘i Kākou: Kaua‘i County General Plan establishes long range priorities for growth management and community development on Kauaʻi. The General Plan was approved by the Kauaʻi County Council in February 2018 and signed into law by Mayor Bernard P. Carvalho on March 15, 2018.
The General Plan is based on the community’s vision and goals for Kauaʻi’s future: that Kauaʻi will be a sustainable island, a unique and beautiful place, a healthy and resilient people, and an equitable place with opportunity for all. It was developed over a four-year process, which began in 2014. 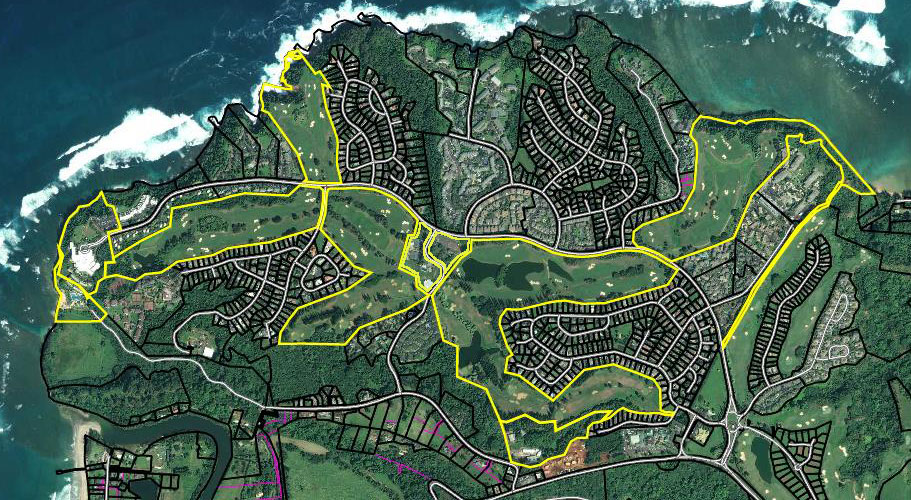 Sale Price information on the Makai Golf Course tax parcels
It's very difficult to discern exactly how much Starwood Capital paid for all 8 parcels that are Makai Golf Course - the 27 holes (5 parcels) plus Clubhouse, maintenance and parking parcels. The sales price on the tax roles of $3,713,341 listed for each of the 8 parcels implies a total price of $29,707,448. But according to the State of Hawaii Bureau of Conveyances document # A-68980331, the conveyance tax that was actually paid at the time for these 8 parcels was $224,648. At a 1% tax rate, that implies a price tag of $22,464,800. Perhaps they were granted a lower tax rate of 0.756% on the $29.7M at the time?

View the detail tax records for each of the parcels that came with the purchase of the Makai Golf Course, all 27 holes plus commercial zoned parcels.
Use the following information when performing a search on property sales:
- Neighorhood: 5463-7G
- Sales Date: 11/16/2018 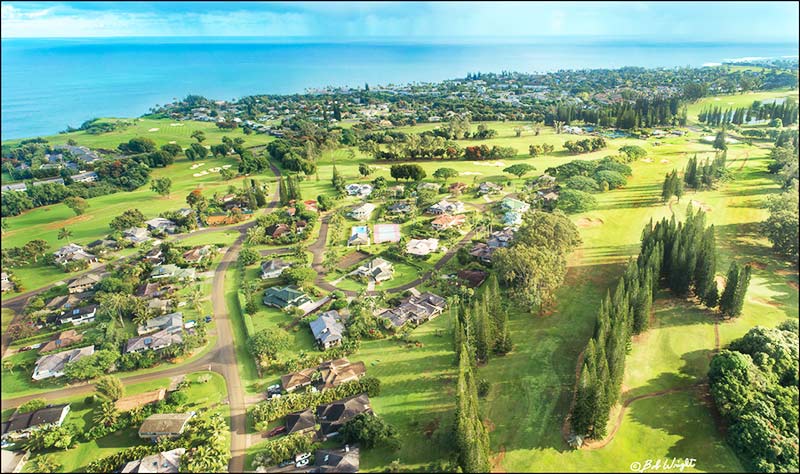